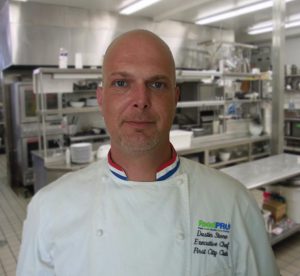 Dustin Stone started working in the kitchen at an upscale Chinese restaurant called Wang’s Mandarin House in Memphis, Tennessee when he was 16 years old. When his family relocated to Savannah, Georgia, Dustin called the First City Club home and started his apprenticeship with Executive Chef Peter Schott.

Classically trained in the European style of cooking, Chef Dustin worked his way up to the Lead Cook position. After his apprenticeship as a Pastry Chef at The Griffin Tea, he accepted a position at the First City Club as the Chef Tourant and then an Italian restaurant named Il Pasticcio. Dustin became reunited with Chef Schott as Executive Sous Chef of Seasons in Savannah, where he eventually became the Executive Chef.

“I emphasize a consultative approach to our sales team members that has proven to be effective.” said Stone. “I came from the restaurant side of the business and my training approach with the TM’s is one that I would have been receptive to when running my kitchen. We are here to add value to our customers. Their success will ultimately be our shared success. It’s not about taking an order. It is about listening and adding value to the operator. We do that very, very well.” 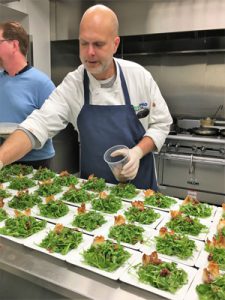 In 2016, our Culinary Creation Center was completed and it has been very well received. In addition to Chef Dustin’s Training and Chef duties, he offers corporate tours of the facilities, ending with an open discussion about menu ideas, kitchen efficiencies and a host of other topics.

To take advantage of the Culinary Training Center, simply contact your Territory Manager to schedule a tour and an appointment with Dustin.